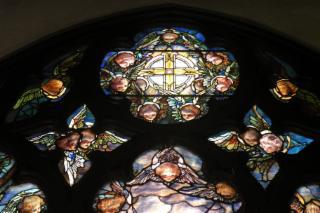 Christ Church was organized by John Suffern in the 1850s and Incorporated in 1860, thus barely predating the Civil War. Our current Church is the oldest, extant building in Suffern, filled with glories from past generations, such as our seven Tiffany Windows. We sit on property once occupied by Rochambeau, George Washington's French companion. The March to Morristown, New Jersey and then the famous "Crossing of the Delaware" started on our property, moving down what is now Route 202, also called the Continental Highway.

The Church Building was expanded three times into its present size and modernized in the 1970s, revamping the altar to make it free-standing, replacing the original Roosevelt Pipe Organ and adding an Ambulatory, making the Sanctuary far more usable.

In the late 1890s, the Art Gallery and Stage areas were built. In the 1920s, the Offices and Parish Hall were constructed and in the 1960s, the entire large Education Building was constructed. The church structure sits on 3.5 acres, including one 12 room house. Additionally, the church owns the two-family house next door. We do not lack space!

We are located one block south of Soldier's Monument in the heart and crossroads of the downtown area of Suffern, immediately next door to Village Hall and the Police Department. Parking is available immediately behind the Church; access is obtained by heading west on East Maple Avenue and turning right into our rear driveway.